Fernanda Gattinoni. Moda e stelle ai tempi della Hollywood sul Tevere (Fernanda Gattinoni. Fashion and stars in the days of Hollywood on the Tiber) : this is the title of the significant  exhibition in Rome, commemorating the artistic marriage between one of the greatest exponents of Italian post-war fashion , Fernanda Gattinoni, and famous Italian and Hollywood stars, who moved to Rome in those years to make some of the most memorable movies in the history of international cinema. 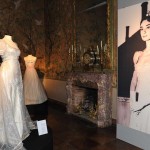 The event, opened on January the 28th at the Boncompagni Ludovisi Museum in Rome and will be on show until March the 10th. It traces the stages of the life and career of this extraordinary designer who took her first steps in the fashion world when she was still very young, after experiencing an apprenticeship in London and a job with a famous Milanese dressmaker.

After the end of the Second World War, Fernanda moved to Rome where she opened a small atelier sewing dresses with her own label next to Piazza del Popolo. The Roman atelier  soon became  famous and great artists and movie makers such as Renato Guttuso and Roberto Rossellini started to frequent it.

Within a very few months, Fernanda became one of the most beloved dressmakers of the ‘Hollywood on the Tiber’ and her atelier was  a regular destination for the international jet set visiting the capital. First ladies and ambassadresses such as Evita Peron and Claire Boothe Luce, world famous movie stars such as Lucia Bosé, Bette Davis, Marlene Dietrich, Audrey Hepburn, Gina Lollobrigida, Kim Novak, Lana Turner, Ingrid Bergman and Monica Vitti: everybody loved Fernanda Gattinoni’s creations.

They attended her atelier both to commission their personal dresses and for the creation of sumptuous costumes to wear on the set, hypnotized by her profound love of rich embroideries, drapery and for a restrained, rather severe style revealing her typically English training.

Her creations were an explosion of macramè lace, silks, black velvet, organza or double satin decorated with rhinestones, silver finishing  and pearls of excellent quality, for a seductive and always womanly look.

The celebratory event, curated by Sofia Gnoli, through twenty-four magnificent dresses relates the unique style of the couturière who charmed, intrigued and dressed the Hollywood stars who visited Rome in the 50’s and 60’s to make Italian movies, directed by Italian producers.

The dresses displayed belong  to the personal wardrobe of famous actresses such as the Italian Anna Magnani and her “collection de petites robes noires” but there are also many costumes personally sewn by Madame Gattinoni and worn by Hollywood actresses in the movies.

The path of the exhibition opens with the private wardrobe and costumes worn by Ingrid Bergman in the movies “Europa 51” (1952) and “Fiore di Cactus” (on this occasion Fernanda created for the actress a gorgeous dress made of light blue silk decorated with crystals and pearls) and it continues with models created by Gattinoni for Lana Turner, one of the most faithful customers of the Italian fashion house. The deep friendship started in 1954 when the Hollywood actress came to Rome to make the movie “La fiamma e la carne”.

Visitors to the exhibition will also see suits belonging to the Casanova collection, worn by Kim Novak, while the final section of the event is focused on the micro-collection of the “petites robes noires” from the personal wardrobe of Anna Magnani, the fabulous Italian actress who gave prestige to Italian post-war cinema.

A special section is reserved for the dresses worn by the actress Audrey Hepburn in the role of Natasha in the movie “Guerra e Pace” in 1956.

Along with the original Gattinoni creations, the visitor can also see many pictures showing the intimate relationship between Fernanda Gattinoni , protagonist of the rising Italian fashion industry, and some of the big stars of the international movie world. The showing of historical documentaries concerning the Maison and some clips from the movies “Europa 51”, “Guerra e Pace”, “Siamo donne” and “Fiore di Cactus” allows you to immerse yourself completely in this superb union of art and fashion.

The exhibition, coming from Paris when it was displayed in the prestigious setting of the neoclassic rooms at the Italian Institut of Culture in the French capital, after its showing in Rome, will be hosted in Modena, Berlin and Naples, to witness the birth of the myth of Italian haute couture in Europe too.